When guests entered the Walt Disney Theater, they found themselves in a long hallway filled with personal artifacts and memorabilia from Walt Disney's life. Exhibits here included: the eight unique Academy Awards presented to Walt for Snow White and the Seven Dwarfs, a scale model of the Nautilus submarine from 20,000 Leagues Under the Sea, letter written to Walt Disney, and various pictures of Walt's many achievements[1].

After reaching the end of the hallway, guests reached the entrance to the building's two theaters. Here, a large mural created by Disney artist Bill Justice could be found. The mural, which featured over 170 characters, took four months to complete[1]. As new Disney films were released, characters from the animated feature would be added to the mural (this practice ended in 1986 with the release of the Great Mouse Detective) [2].

After entering the theater, guests would watch the attraction's film, which was a 23 minuted biography of Walt Disney. The film was narrated by Walt himself, and began with his early childhood in Marcelene Missouri, and ended with the creation of Disneyland, and his plans to build EPCOT..

After watching the film, guests exited the theater and entered the post-show area. Initially, guests would see large displays of Walt Disney World's Phase One, EPCOT, Walt's Carolwood Pacific railroad, and early Audio Animatronics in this area[1]. The room was perhaps most notable, however, for the Western River Expedition model. This preview of the intended attraction, was tied in with a nearby Audio Animatronic owl named Hoot Gibson, who would introduce himself as the star of the upcoming Western River Expedition, and give a lecture on Audio Animatronic technology[1].

During the Walt Disney Story's run, the attraction was temporary replaced three times:

In June of 1981, the attraction was replaced with the EPCOT Center Preview Center. At this time, the area's postshow as restructured, and the displays about Carolwood Pacific and the Western River Expedition model were completely enclosed. Hoot Gibson was also given a new spiel about the upcoming EPCOT Center Animatronics [1].

In 1984, the Walt Disney Story was once again temporarily replaced by a pre-show and film focusing on the 1984 Los Angeles Summer Olympics. At the end of the summer the original attraction returned[1].

In 1988, the Disney-MGM Studios preview center replaced the attraction. Once again, the postshow was redone at this time, and Hoot Gibson now sat in a director's chair to talk about the new park[1].

In October 1992, the Walt Disney Story closed. Although the company cited deterioration of the film as the reason for the closure, the attraction's popularity had waned [1].

On August 27, 1998, the former Walt Disney Theater became the Town Square Exposition Hall[4] . This “home to photographic marvels, images and innovations", was sponsored by Kodak and housed a series of photography inspired exhibits.

When guests entered the Exposition Hall, they found themselves in the Hall of Still Images[5]. Here, guests could take souvenir photos in front of various backdrops, and see vintage photography equipment dating back to the 1800s. At the end of the hallway, guests could still find the Bill Justice mural.

Entering the building's theater, now renamed the Hall of Moving Images[5], guests could watch classic Disney cartoons. In the back of a theater, another mural featured a timeline of Disney animation beginning in 1901 with Walt Disney's birth. Exiting the theater, guests walked through the Hall of Digital Technology[5]. Here they could see the "image expo", which featured different vintage photos taken in Walt Disney World. Finally, guests would exit into the Kodak Camera Center, where they could purchase camera merchandise. The Town Square Exhibition Hall closed April 2, 2010 [4].

With the closure of Mickey's Toontown Fair on February 11, 2011, Disney knew it needed a new location for a permanent Mickey Mouse meet and greet. To solve this problem, the Town Square Exhibition Hall was refurbished, eventually reopening on April 1, 2011 as the Town Square Theater [6]. 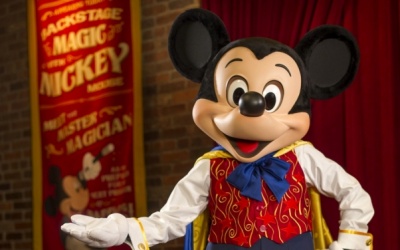 Mickey in his dressing room.

When entering the new theater, guests initially had the option of meeting either Mickey and Minnie Mouse or Disney princesses (who would eventually be relocated to the under construction Princess Fairytale Hall). In line with the new theater's theming, the Mickey meet and greet was officially titled "Backstage Magic with Mickey Mouse".

When guests entered the new Town Square Theater they choose which experience they wanted to wait for. If they choose to meet Mickey Mouse, they entered the right hallway. Adorning the walls here, are animated posters advertising Mickey as a magician. Once guests arrived in the mouse's dressing room they could interact with Mickey and Minnie Mouse. Throughout the room guests could also find a number of tributes to Disney history and other Walt Disney World attractions.

If guests chose to visit the Disney princess, they would go to the left, where they could also find a series of animated posters. Unlike Mickey, whose room was themed as a dressing room, the Disney princesses met in front of smaller themed backdrops. No matter which character experience guests chose, they ended up in the theater's gift shop upon exiting.

The first major change to come to the Town Square Theater occurred on October 31, 2011, when a new talking Mickey Mouse made his debut [7]. Although the next generation meet and greet character would continue to meet sporadically over the next couple of years, it was not until October 21, 2013 [8], that the talking Mickey experience became permanent. Following the opening of Princess Fairytale Hall on September 18, 2013, the Disney princesses moved out of the Town Square Theater [9]. Mickey and Minnie then remained the sole occupants of the theater until May 20, 2014 [10], when Tinker Bell moved in. At this time, the new Garden Theater opened within the Town Square Theater, which allowed guests to shrink to the size of a fairy and be magically transported to Tinker Bell's Magical Nook.

The most recent change to the Town Square Theater came on May 12, 2018, when the talking Mickey Mouse was retired in favor of a traditional Mickey meet and greet [11].

The Town Square theater features numerous references to the history of Walt Disney animation and the Walt Disney Company. Below is a list of some of those Easter Eggs found when guests go to meet Mickey backstage.

A letter on the desk in Mickey's dressing room from J. Thaddeus Toad Motors LCD. reads:

"Mr. M. Mouse
Thank you for your recent purchase of our 'Nifty Nineties' edition horeselss carriage. We feel confident that this conveyance will more than suit your motoring needs whether it be for business, pleasure or nowhere in particular.

This letter is a reference to a Mr. Toad's Wild Ride vehicle that had previously been housed in the Town Square Exhibition Hall[12].

For fans of Disney Animation, the Bill Justice mural that adorned the wall of the Walt Disney Story Theater was a highlight of the attraction. Although the mural has since been removed, you can see a high quality photo of the attraction at Imagineerindisney.com by clicking Here